It Takes Guts to Talk About Colon Cancer

We all have a certain comfort level when it comes to talking about our health. On the surface, we usually have no problem discussing our aches and pains with friends. But when it comes to some of those deeper health issues, we tend to close up and keep our concerns close to the chest. Nevertheless, there are some things that should be talked about in certain circles, no matter how uneasy it might feel. And since this month is Colon Cancer Awareness Month, it makes sense to begin here.

It’s estimated that 1,480 new cases of colorectal cancer will be diagnosed in Nevada this year, and nearly 600 people will die from the disease. This type of cancer almost always develops from precancerous polyps (abnormal growths) in the colon or rectum.

Screening tests can find and remove these precancerous polyps before they turn into cancer. If found early, this type of cancer has over a 90% 5-year survival rate. Once it spreads to other organs, however, that rate drops to about 14%. Early and regular screening can often increase your odds of becoming colon cancer free as you age.

If it’s preventable, what’s all the fuss? 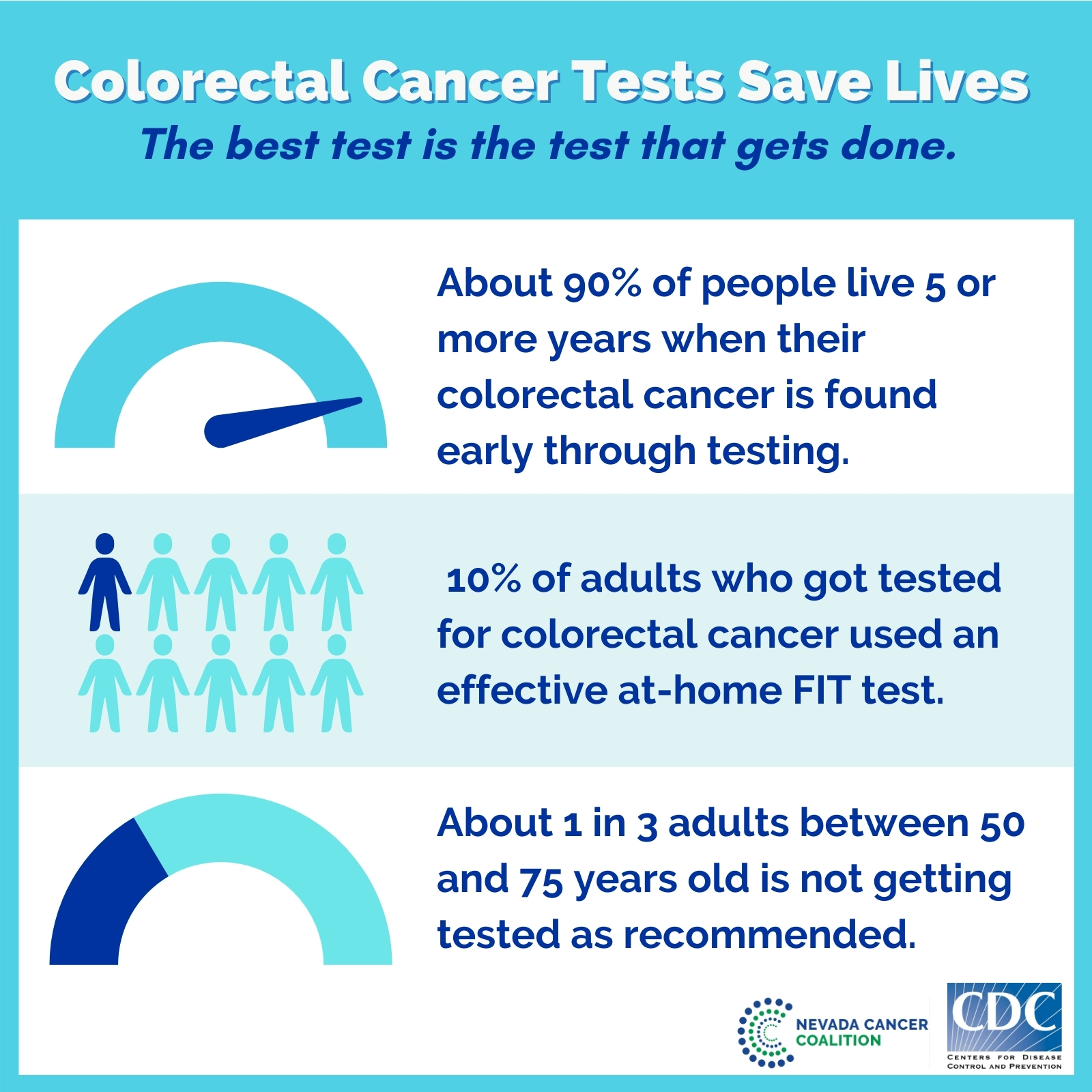 A 2013 study published in the Journal of the National Cancer Institute found a sharp rise in colorectal cancers in adults in their 20s and 30s; as high as 7.9% per year for people between the ages of 20 and 29. Compared to people born around 1950 and earlier, millennials and Generation Xers have double the incidence rates of colon cancer and quadruple the rate of rectal cancer, according to the new findings. If you have kids or grandkids and have cancer in your family history, please give them a gentle nudge to have a conversation with their doctor.

The increased rate among younger adults has prompted the American Cancer Society to lower the recommended age to start screening for colon cancer to 45. When you should begin screening is a decision you’ll have to make with your doctor.

Scientists do not yet know what is behind this spike since the rate of colon cancer has actually been decreasing in every other age group in the U.S. thanks to better screening methods. But one thing is clear, taking the time to screen for colon cancer is a healthy decision that should take place sooner rather than later.

It’s notable to remind readers of some familiar people in our community who have had to confront this disease. Most recently, the tragic death of actor Chadwick Boseman of ‘Black Panther’ movie fame, who put a spotlight on the fact that colon cancer has been increasingly affecting younger adults over the past decade.

Sharon Osbourne, outspoken talk show host and wife of legendary rocker, Ozzy Osbourne, found out she had colon cancer in 2003. Following treatment to remission, she now helps others living with the disease.

And who can’t forget Charles M. Shulz, the man behind the comic strip “Peanuts”. Schulz passed away from the disease in 2000 after a decade-long battle.

What can we do about it?

Have a conversation with those you love about colon health. Since the majority of you tend to have children or grandchildren in the 20’s, a frank discussion with about the disease make a world of difference. Be sure to include your family history, with colon as well as other cancers of record. Your genetics play a significant role in your children’s health.

Recommend healthy lifestyle habits, and encourage reducing or eliminating some of the factors that cause colon cancer, such as:

Detection of cancer before symptoms appear has transformed the world of cancer care. According to the American Cancer Society, cancer screening is critical to staying healthy and should be considered essential health care for every Nevadan.

If you would like to learn more about colon cancer and important screening conversations, visit the Nevada Cancer Coalition's colorectal cancer section on the website: www.NevadaCancerCoalition.org. You’ll find excellent decision guides, hundreds of resources, and tools for having that conversation with your health care provider.