Background: In 2006, Nevada voters approved the Nevada Clean Indoor Air Act, which prohibited smoking in many public places but exemptions still allowed smoking in casinos and 21-and-over bars. The 2016 Nevada Adult Tobacco Survey showed support for prohibiting smoking in casinos (52.9%) and bars (44.6%) but a more detailed understanding of the current level of support—or lack thereof—for 100% smoke-free locations in Washoe County is needed. 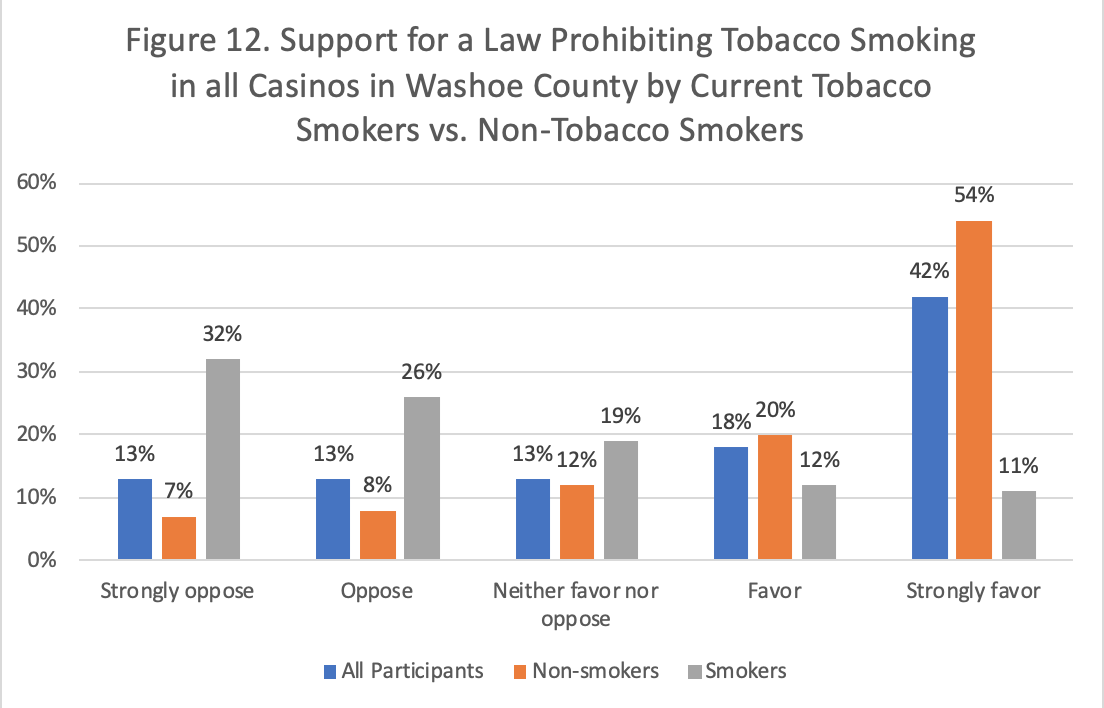 Research shows locals in favor of expanding smoke-free laws to include casinos and bars. Growing support for smoke-free casinos and bars indicates this should be a priority discussion in protecting the health of Washoe County citizens. Doing so will further reduce the social acceptability of smoking in public places, continue to disentangle the association of smoking and gambling, and help reduce second hand smoke (SHS) exposure to employees and visiting customers.

In the United States, cigarette smoking remains the leading cause of preventable death. It is responsible for more than 480,000 annual deaths, including more than 41,000 deaths resulting from secondhand smoke (SHS) exposure (1). To curb the tobacco epidemic, governments have introduced policies to create smoke-free environments, which have shown to reduce death and diseases associated with SHS, reduce the number of people who start smoking, motivate smokers to quit, and protect workers from the dangers of SHS

“This study was conducted before Covid-19 hit the U.S. so given increased health and safety concerns due to the pandemic this represents a golden opportunity and presents an additional incentive for bar and casino establishments to go smoke-free.”
- Eric Crosbie, PhD, MA, University of Reno

The research study has been featured by the American Non-Smokers Rights Foundation as well. Assistant Professor Eric Crosbie is a political scientist who examines commercial determinants of health and public health policy.